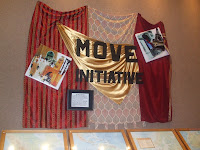 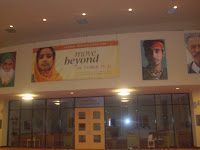 The International Missions Team was lead of the Lord to attend this Global MissionFest primarily to glean how they executed this missional event as well as to speak with the various missionaries on the field in the USA and abroad. We also wanted to hear how God is working in their lives and what He is doing in the regions and areas they serve. We were informed that this church, which is about 80 years old, supports about 97 missionaries. Nineteen  from 12 countries were present. Of the 97 total missionaries, half have come directly from their congregation. They are considered a “sending church”. They not only send and support missionaries, but have short-term missions teams (called Go-Teams). In regards to how they presented the Global MissionFest, they informed us that over the years they have learned to plug into existing activities rather than to have special services. The reason being was that attendance would drop with the latter. 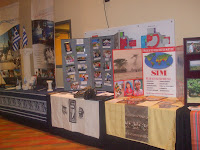 We attended Tuesday and Wednesday nights activities, respectively. Ericka and I attended Tuesday night activities which was their women’s Bible study. There was a meal for $3 and great fellowship with the women at our table. They were very welcoming. To accommodate the missionaries, they deviated slightly from their existing format. There were 11 women missionaries highlighted and of the 11, three were interviewed by a moderator. Each shared how God called them right where they were in their careers to use that for mission work- many serve in supporting roles both in the USA and abroad. Those roles include photography, business such as mutual funds industry, IT, and administration. These specific ministries were highlighted. And, a question which surfaced during the interviews was to ask God the following. How do you (Lord) want what I have experienced in my life used in your mission?

The three missionaries highlighted covered how God used their professional backgrounds to spread the gospel in places such as Ecuador now serving stateside in CO, Kenya, and France. The first missionary interviewed revealed how God was using satellite Christian radio to broadcast the gospel. She reported that a recent survey indicated that roughly 1 million people were hearing the messages in Arabic countries! She also stated that they were being heard 60% in Asia, and in other countries such as India, Bangladesh, Turkey and Indonesia (she requested special prayer for that country as it is becoming more militant and the door may be closing). The second missionary has served in Kenya now for 18 months and is a Psychologist. She stated that she serves in several capacities with a focus on the HIV/AID ministry and dealing with the stigma associated with persons being tested. Her prayer request was that HIV treatment would not stop. She conveyed that there were some 65,000 orphans and that many were living in the garbage dumps with all that that environment entails. She concluded by saying that Kenya was the largest refugee camp in the world and to pray for the Muslim women. They each spoke of the highs and lows of being in full-time missions. They all said to “find out what God is doing and to begin doing your part! (this is of course within the context of global missions). 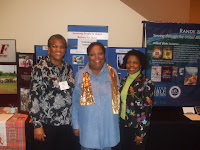 The last interview was from a missionary based in France. This church is embarking upon a new church-wide initiative called The Move Initiative. They are partnering with Greater Europe Mission to reach out to North African immigrants. They are challenging their members to consider relocating to France for an initial three year commitment beginning in January 2011.Their prayer is “that God will move in their hearts, calling some to move to France and the rest of them to send and support them.” Ericka and I spoke with several missionaries and took  photos with the only African American one there from Missions Adventures. We also met the Director over the women’s ministry who showed us their Global Outreach Center. I will talk about the center further down in the report. 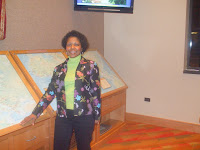 On Wednesday night, Susan and I attended. We went to hear a panel discussion where 6 missionaries discussed their backgrounds, their lives prior to missions, where they serve, and the highs and lows of missions. We met the Missions Pastor, who indicated his support as well as others who offered their support. Shannon, who I had been speaking to about the Perspective course was there and indicated briefly the process for payment which she had emailed to me that afternoon. We then went to their prayer tower and prayed along side of others interceding for the salvation of Muslims and the missionaries assigned to those regions where they reside as well as in our local communities. What an experience!  We also visited the Global Outreach Center where every Sunday, the children ministry’s goes into this room and they are taught about people in other countries. Their teaching is country theme driven. Susan and I took pictures there as well as with two missionaries.  Photos are spread throughout the article above and two below. 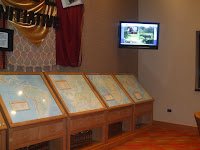 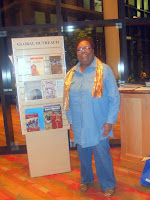 Note:  Don and grandson, Amiri dropped by briefly on Thursday evening.  They met one of the missionaries from Germany.  They spoke briefly.

The Nations Are Watching

The primary verses for Study 2 are Exodus 19:1-6; Deuteronomy 4:1-9; and 1 Peter 2:9. It is descriptive of God's intentions for the role Israel would have in the world and how we would be responsible for that same role today. Also, take some time to explore the various characteristics on eagles and how symbolic they are to God in relation to us.

I encourage you to comment on any of the scriptures and in particular the section, Seeing the World through God's Eyes. What did Holy Spirit reveal to you?

Our prayer is that Holy Spirit will reveal how we can be involved in world evangelism through our prayer life individually and corporately. That He would give us a prayer strategy that everyone could participate in for the nations so that we can become more world missions - minded. That we would use and build upon the tools that he has already provided thru the Operations World link, the 21 days of prayer and the daily Unreached People of the Day which rotates daily in Jesus name.
Posted by President of New Abundant & Everlasting Life Ministries, Inc. at 12:18 AM 1 comment:

Several of us attended the opening night of the Missions Conference. It was a wonderful experience to see the "Flag of Nations" processional with the people from each country represented carrying their country's flag. There were 42 nations represented. Praise and Worship were also God inspiring as we sung songs reflective of God's Heart for Nations! The one song that really touched my heart was People Need The Lord!
The opening speaker was Dr. Jerry Root, an Assistant Professor of Evangelism and Leadership, and the Director of the Evangelism Initiative at Wheaton College, as well as Associate Director of the Billy Graham Center's Institute of Strategic Evangelism. He has been teaching at Wheaton College since 1996. Pastoring three different churches over a span of 23 years, he has worked for 19 years in student ministry and for four as senior pastor. His preaching and lecturing have taken him to 14 countries and 19 states in the US.
His message was "Make Missions Personal" from Philemon 6. The overall gist of the message was for each of us to be confident in the love of God to be his witness and to let that love flow out of us. And, the place to start is right where we live and move and have our being.

There were several agencies with exhibits denoting various opportunities to go on the international as well as domestic missions field.  We spoke to several of them about their experiences.  Note:  Other members of the IM Team are planning to attend either during the day or during the evening session for the balance of the conference.
Posted by President of New Abundant & Everlasting Life Ministries, Inc. at 9:44 AM 1 comment:

Let's Start At The Very Beginning

The main scriptures for this study are Genesis 11: 1-9 12:1-9; Galatians 3: 28-29.  I invite you to comment on any of the scriptures and in particular the section, Seeing the World through God's Eyes.  What did  Holy Spirit reveal to you?  Is there anything He requires of you?

Our prayer is that God will give each of us new openness and willingness to be available to him. That he would give each of us the kind of courage Abram(now Abraham) had which enabled him to obey God wholeheartedly, so that nations can be blessed through each of us in Jesus name.
Posted by President of New Abundant & Everlasting Life Ministries, Inc. at 12:53 PM 2 comments:

Welcome to this blog which was designed to increase your overall knowledge in the area of missions. Click here to download your copy of the study. Please use the COMMENTS sections to communicate how Holy Spirit speaks to you in the various sections of each study. They are located beneath each post. Just click comments and add your statements. Many thanks to the authors Jim and Carol Plueddemann for making this resource available. Below is a photo of them with Minister Sheena Coleman, President of New Abundant & Everlasting Life Ministres, Inc.

Dr. Jim Plueddemann is professor and chair of the Mission and Evangelism Department at Trinity Evangelical Divinity School in Deerfield Illinois. He teaches courses in areas of leadership and culture as well as teaching in cross-cultural settings.

Contributors - Please Provide Your Comments After Each Study - Thanks!

Basics of Prayer and Fasting

Learn some basic facts about prayer and fasting here!

21 Days of Prayer For Global Harvest

Engage in the 21 days of prayer for Global Harvest, find out how here